Throughout the years she has developed an always growing passion for photography, which she has enriched and perfected technically by playing an active part in many photographic courses and workshops, among which the Tuscany Photographic Work (TPW).
In 2009 her first solo exhibition, called “Cine-Statica”, was mounted in the bookshop Fahrenheit 451 in Campo de’ Fiori in Rome.
In 2010 her second solo exhibition, “Album di Emozioni”, was housed inside the Gran Caffè San Marco in Latina (situated in Corso della Repubblica, 191). In Latina she also displayed some of her shots at the “Casa del Combattente” (situated in Piazza San Marco, 4).
In the same year her third exhibition, “Metamorfosi Oniriche”, was housed inside the Caffè letterario Mangiaparole in Rome. She also took part in the art exhibitions “Maggio Sermonetano” 2009 and 2010 and in the roman exhibition “Lungo il Tevere” with a photographic series.
Some of her shots were selected for an exhibition path at the “Equilibrio” termal baths, nearby the Rome Termini station. She also took part in several collective artistic exhibitions, among which: “Corviale”, “Roma città aperta”, “Falsi d’autore” (first and second edition).
At the “Pentart” Gallery in Rome (situated in Vicolo del Cinque, 14) she exhibited in the art exhibitions: “Lei non sa chi sono io…!”, “Del mio peggio!”, “Artisti a confronto” and “Pasqua alla Pentart”, “Aria di Primavera”, “Viaggio Onirico”, “Il Setaccio” and “Il Blu nell’Arte”, while in the Coin Art Gallery in Velletri she exhibited as one of the “Artisti del mese” [Artists of the Month].
She also took part in the Erotic Art Exhibition “Voglia di Pennello” curated by the art critic Daniele Radini Tedeschi, at the “Pentart” Gallery in Rome. In the same city she also exhibited in the collective art shows housed at the “Brancaleone” Social Centre, at the “Consorti” Gallery in Via Margutta and at the “Il Leone” Gallery in S. Giovanni. She also took part in the 4th edition of the “Premio della Lupa” by the Four Points Sheraton Hotel in Rome.

In Porto Cervo she exhibited in “Il Saloon di Porto Cervo”, an International Contemporary Art Exhibition at the “I Giardini di Porto Cervo” Gallery.
She won the Critics’ First Prize on the occasion of the 4th “Premio Pentart”, at the “Pentart” Gallery in Rome.
Since 2011 she has been brought into the prestigious “stable” of the Count Daniele Radini Tedeschi, who is an art critic.
She is also one of the 2011 academicians of the prestigious “Accademia di San Lazzaro”, based in Rome. She took part in the celebrations for Michelangelo Buonarroti that took place at the Basilica SS. Apostoli in Rome from 9th till 16th September 2011 with two works of art.
One of her photographs was inserted, together with its review, in the book “L’esausta Clessidra” by the Count Daniele Radini Tedeschi, published by Rosa dei Venti, 2011: the volume is currently in use at the “La Sapienza” University in Rome, department of Art History.
She also took part in the “Triennale Internazionale d’Arte 2011” in Rome, and in the art season “La Memoria e il Presagio. L’Eclettismo nelle Arti” dedicated to the Italian architect Armando Brasini.
In January 2012, she also exhibited with the painter Antonella Scaglione in “I colori dell’Anima”, a photography and painting solo exhibition held inside Palazzo Pontificio Maffei Marescotti in Rome.
In February 2012, one of her pictures was up for sale by auction for the very first time at the “Antonina since 1890” auction house in Rome.
She has been nominated judge in the 2012 edition of the “Premio della Lupa”, which was held in Rome.

At present, some of her shots are in the photographic archive of the Tuscany Region, in that of the Naturalistic Museum in Trent and in the International Guide of the Schmap maps.
She was also inserted in the “Annuario d’Arte Moderna” [Modern Art Yearbook] of 2011 and 2012 and in the “Libro d’Oro dell’Arte Contemporanea”.
One of her photographs was chosen as a symbol for the descriptive manifesto of the “Giornata della Memoria 2008” [Holocaust Memorial Day 2008] (housed by the “Centro Studi Cappella Orsini”) and displayed for a long time in Palazzo Englefield in Rome. 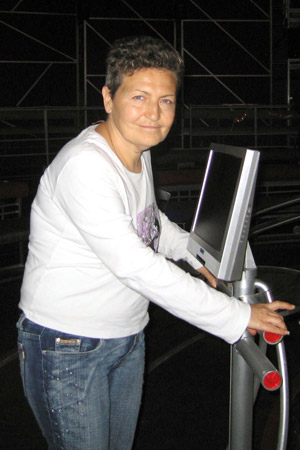